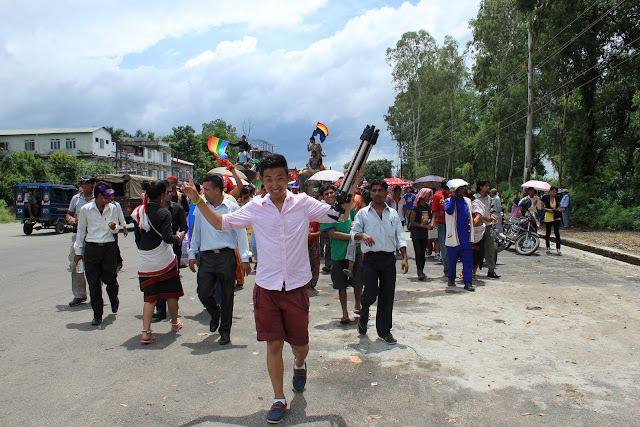 Due to my want to do something spontaneous, something unplanned I thought I would local bus it to Narayangadh instead of flying, however I still debate with myself whether I would go through that long journey again. Okay before you crucify me and say that the distance is only 5 hours away (approx) let me back myself up by saying that the bus I travelled set off 1 hour 30 minutes late from the Gongabu bus park. I knew I should have looked for a bus with ‘Express’ written in huge bold fancy letters. Kalanki was only the first of our many stops. Tea break, pee break, water break; you name it. Having previously travelled to Pokhara, Lumbini, Chitwan by road I hadn’t found it challenging but the ride to observe the Gay Pride was seriously testing my patience. The bumping and grinding that took place inside literally made me dizzy. At times I wondered if the exterior of the bus was falling apart. My two other friends that were travelling with me were wondering why they signed up to film the pride with me.
12.38 AM; that was the time when we reached Bharatpur. The driver dai said ‘hotel aghadi cha, hidera janus’, our few minutes walk quickly turned into a cross country walk on the highway that goes through Bharatpur. If there were any taxis I would have happily paid Nrs 1000 to take me to the hotel because walking the highway alongside barking dogs that knew we were intruding their territory and pulling a two-wheeler suitcase was not a pleasant experience. Very much thankful it didn’t rain though. Guess what, when we were just 200 metres away from the hotel a taxi decided to stroll by, I don’t know whether I was more annoyed or relieved. The security dai greeted us with ‘tapaiharu kina utlo bata pasnu bako’, I was too tired to say anything.
Let me advise you not to book the same hotel that you stayed in six years ago. It was manageable for one night but the price was too steep for my liking! And in this day and age saving is earning boys and girls. Enough of this pre-blaah blah! On to the Gay Pride! I didn’t know what to expect. All three of us, my cousin turned cameraman, friend turned assistant had never attended such an event, that too a Nepali one. We were apprehensive but were counting down the time slowly. It was 11AM and we reached Paras Bus Park (the same place where we decided to do the midnight trek to the previous night). As we walked towards the assembled crowd, carnival was all I could think of. There were elephants, lots of fancy rickshaws decorated with blown up condoms, musical bands and many many manyyy transgender men ‘women’. What united all the people there were the smile on their faces. Everyone, from reporters to women from various communities that came to support the LGBT community looked happy to be there. I was happy to see people happy, comfortably being themselves and not having to worry about what tyo pasale dai is saying or rickshaw walla bhai etc.
I would not quite call the event Gay Pride as Gay means a homosexual man; a man who holds sexual desires to another man. Most of the turnout at the event were of men that felt that they were born in the wrong body, in that sense they associated with the female sex more than the male (transgender). And that is what I believe what most of us Nepalis need to be educated about, someone who is a gay doesn’t mean he likes dressing up as a girl and being femminine. There are men with masculine qualities that have feelings for the same sex. Enough of my sexuality education. Till this date I haven’t seen such energy when dancing, it was too explosive. Especially when Sheila Ki Jawani came on, honestly speaking I wanted to drop my mike and go grind my hips but ke garne, daytimema sexy moves garnu alik laaj lagcha. The event had the presence of Nepal’s first openly gay lawmaker Sunil Babu Pant and also Meghna Lama who is Miss Third Gender 2010. I had a brief chat with her and she’s beautiful. I kid you not.
When I returned to Kathmandu and showed my aunt the pictures and videos it was a bit difficult for her to understand the term third-gender, after saying ‘samlingi’ about a dozen times and saying that these are guys who want to be girls and not doing it for some show it made me realize how unaware that we the Nepali public are. It’s not our fault for not knowing but from my experience what I’ve observed is even we the youth of today who have the ability to question and understand the different sexualities do not want to know because it is simply a topic that follows with the word ‘chyaa’. Now this comes as a disappointment for a nation that is soon (kaile ho kaile) to legalize same-sex marriage; when it legally does then Nepal will be the first country in South Asia to do so. Here’s to hoping MP Sunil Babu Pant  and his team keeps raising awareness and educating the Nepali public regarding the LGBT community and our Nepali daju-didi’s to become more broad minded and to understand if not accept that there are people with diverse sexual preferances.
For Photos of Gay Pride Nepal 2011 – Click Here
The article was originally published in Navyaata magazine (Sept-Oct Issue)

Lex Limbuhttps://lexlimbu.com
Lex Limbu is a non-resident Nepali blogger based in the UK. YouTube videos is where he started initially followed by blogging. Join him on Facebook and follow him on Twitter.
Previous articleHighway Needs YOU!
Next articleMalina at Miss World – Photos!