Ek Chin with Jharana Bajracharya will hit youtube this Saturday at 2PM. Few back ground on the video’, it was filmed in Berkhamstead, UK in early December before Jharana left for Nepal. She is no longer in the UK. The interview was conducted after a mutual decision between Jharana and  me as I showed keen interest to interview her whilst she felt that from her behalf she should clarify few things. We hope the point’s that we discuss will give you a greater insight into her life and her decisions.
Filming for the Ek Chin with was not the first time we met… we first met back in July in Nepal. Since then I have visited her several times at the meditation centre where she was staying at. From being such a die hard fan of Jharana Bajracharya, the actress the woman on screen. I made videos, constantly update photos and blogged plenty. Never did I think that one day we would somehow form an unexpected friendship… or that I would interview her. I think the power of media is truly wonderful and I am an example of someone who’s used it in a brilliant way! Without youtube and blogger… all this and plenty would not have happened.
In the quest to see and meet Jharana Bajracharya the celebrity I only got as far as meeting Jharana the person. I don’t know if I will ever get to meet Jharana Bajracharya; the woman who lights up the screen with fire. But I’m sure glad that I’m one of the few to have met Jharana, the very simple girl in her own world.

PS. Below is something that I wrote about Jharana wayy back in Jan of 2009. 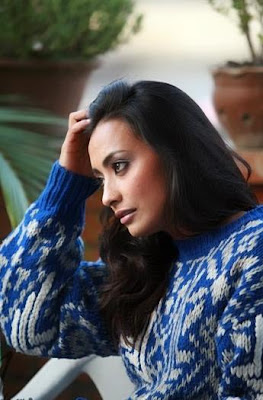 Shes an engima’
Many People wonder and ask me what it is that I see in Jharana, I dont know how to explain it to them. Its there yet I cannot express it. Its not the desire which I am obsessed with unlike others. Its the person underneath the defensive wall that I wish to learn more about.
She seems distant in her interviews, far from the seductress siren dancing on top of Sonu Nigam. She seems distant in her interviews, just like the roles in her Nepali music videos. I as a fan, will support her and many actions which she has took can be justified and will be justified.