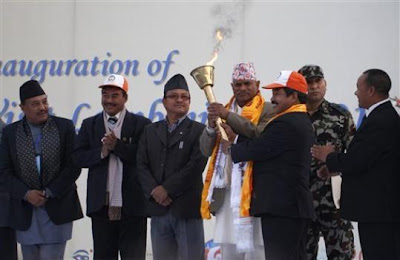 14th of January was quite an eventful day for Nepalis… it was the day when Chinese PM decided to make a surprise 5-hour visit to Kathmandu which brought many areas of the city to a halt, it was the day when Ek Chin with Jharana Bajracharya hit youtube [haaha] and last but not the least it was a day of mega-rushing around for President Dr Ram Baran Yadav though delayed yet made it to the official launch of Visit Lumbini Year 2012 in the birthplace of Buddha; Lumbini.
The function which was slated to finish at 4PM took a very delayed start at approximately 3.30PM amongst a crowd of more than a 1000. The peace lamp was carried by popular long distance runners and sports persons Baikuntha Manandhar, Jeety Bahadur KC, Sangina Baidya, Krishtina Basnet and Chandrakala Thapa.
The day also marked the official end of Nepal Tourism Year 2011, though it wasn’t a success in meeting the target the increment of tourist arrivals by 22% was an encouraging sign. The Government also launched Tourism Vision 2020 during the inauguration that set the goal of increasing annual international tourist arrivals to Nepal to two million by 2020 and increase employment in the tourism sector to one million.
Ambitious! Hope we put a lot more work in than the not quite ‘successful’ NTY 2011.
For more updates, Join lexlimbu on Facebook!