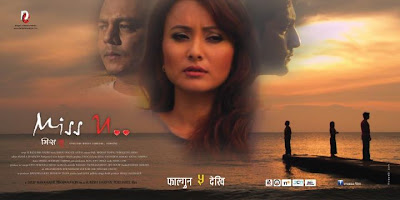 Namrata Shrestha’s next release MISS U is only two weeks away from releasing in Nepal on 17th February but the good news is that the movie will be screened in various towns and cities in the UK this August just when the country will be under the spell of London Olympics 2012! Producer/Actor Dilip Rayamajhi who was recently in the UK for a personal trip cited an August screening for Miss U as more people will have holidays and the general ambience being better then the present winter time.

Currently screenings are expected to take place in Plumstead, Dover, Reading and Cambridge! Let’s see if they actually go ahead. Bhannu ta sajilo cha tara mehenat dekhauney ho ki haina tyo chahi August mai hamile heraula. Aside from the UK Miss U will also have a premiere in Doha and Australia this February, Delhi in March, April in Israel. The movie is also expected to be screened in Malaysia, Germany and Belgium.
Let’s see if it works out. Would love to see the movie though! Below is my favourite track from Miss U – Hamro Sambhandha!