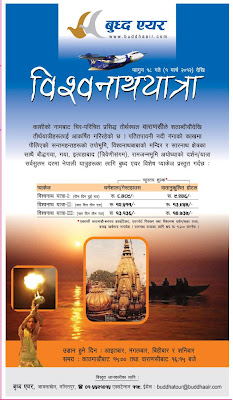 Buddha Air is all set to start flying to the religious Indian city of Varanasi from the 1st of March 2012. The airline which had a set of international routes planned in the past had to delay it’s operations after the ill-fated crash just outside of Kathmandu last year. Having just been on the buddhaair.com website I could see Varanasi as it’s only international destination. I wonder what happened to Paro (Bhutan) and Lucknow!

The link up with Varanasi is expected to draw religious travelers; Tirtha Yatris who have a desire to visit the Kashi of Varanasi and Pashupatinath of Kathmandu. The air will operate four weekly flights.

Sounds good. Also, there’s news coming that a new Nepali airline dubbed BB Airways is all set to start international operations from the 13th September 2012. It’s apparently NRN-funded. Let’s see whether it really takes off or not. One still wonders what happened to the much talked about ALPINE AIR #lol