Nisha and Sahana – The Photo Controversy 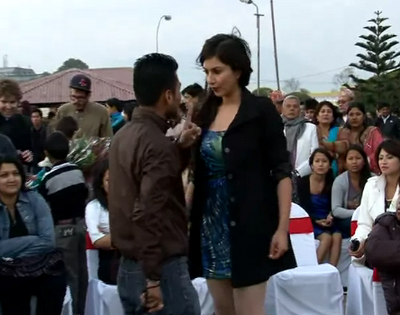 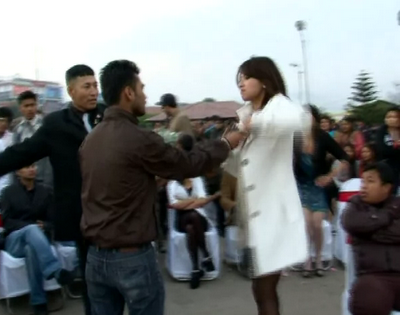 O’ the joys of being famous.

Actress Nisha Adhikari and media personality Sahana Bajracharya are probably the two most talked about Nepali celebrities at the moment thanks to the recent ”photo controversy” that took place at the success bash of LOOT in Kathmandu. With a click of a button you will be able to view what really happened though we might not really understand why it had to happen. Nisha surely looks ready to attack, the way she pounces on the journalist Anup Bhattarai is quite something. I believe there’s more to this then what we are seeing, maybe the actress had been troubled by this particular journalist for a while now. Leaping in the middle is the ‘good friend’ Sahana ready to save the day. However Sahana who is seen trying to snatch the camera off Anup has come under much criticisms for her action.

When I first watched the video, I was quite shocked to see what was unfolding but it instantly made me wonder why this was really happening – come on… these figures are used to being photographed all the time; one needs to be photographed and talked about in such profession. Maybe Nisha wasn’t having a good day and her request for photos to be not taken resulted in her verbal with Anup Bhattarai… maybe not. Thanks to the rising number of magazines/newspapers/entertainment websites, I believe it’s not long till tabloid culture will kick off in Nepal, the culture when soon celebrities will be more talked about what they’re wearing/drinking, who’s house they were leaving and where they were shopping.. basically the blurring of one’s privacy. We’ve seen that in Hollywood and Bollywood, it only makes sense for Nepal to go through that phase soon. And I shall say again, film sites such as filmykhabar.com which Bhattarai is believed to work for are more of a tabloid gossip websites, for them capturing what’s not to be captured is their aim. Hopefully our celebrities will learn to stay super composed at such times and always remember that this is the price of fame.

”WHAT HAPPENED?” – That was the question I asked Sahana Bajracharya, in her very own words, this is her version of the incident:

“I am sharing why I got involved in the scene and nothing from Nisha’s perspective. Nisha arrived after me at the event. She requested Anup Bhattarai not to click pictures of her. I inquired if everything was okay and not to give much attention to such reporters. She then disappeared for sometime and I kept looking for her. She returned after 12-15 minutes. She told me that she went to the restroom to get rid of the same reporter who kept hovering around and flashed his camera right on her face. ( he did this in front of me and to me as well) We were standing in front, facing the stage. The seats were not enough for all of us. The reporter approached, close to us and flashed again. Nisha once more, told him not to click picture or write false news on her on his website. The people around noticed and the ones seated in front offered us the seat. He still kept staring at us but we ignored until he came close and tried clicking our low angle pictures. This is when Nisha stood up from her seat in rage. It got louder so even I got up, but not to snatch the camera but to pull Nisha back and mellow down the scene ( watch the video carefully). But when the reporter verbally abused us, I snapped and tried to put his camera down. This is what he said,” TIMI HARU CELEBRITY, PHOTO KHICHAUNU CHAINA BHANE GHAR MAI BASA.. PHOTO JATTI PANI JAHA BATA PANI KHICHHU LAJJA” This is what happened. Even a celebrity has a right to her privacy. If he/she requests anyone from anyone to NOT shoot any picture, the later should step back. This is violation of fundamental right. But at the same time, it was not right for me top try to snatch his camera but the harassment was too much for me to tolerate. Though it was not on me, but I wouldn’t sit down and watch my friend in trouble. But if we are talking about the right and the wrong, it is definitely not right for any journalist to drink or eat while on duty. This reporter was drinking and constantly bugging us. We weren’t the only celebrities there. Sadly, the full footage has been edited in a biased way and made viral. If it was a publicity stunt, I would have done it long ago.” – Sahana Bajracharya

Lex Limbuhttps://lexlimbu.com
Lex Limbu is a non-resident Nepali blogger based in the UK. YouTube videos is where he started initially followed by blogging. Join him on Facebook and follow him on Twitter.
Previous article1 WEEK Till LOOT Hits Aldershot!
Next articleSHOWDOWN – New Year Party