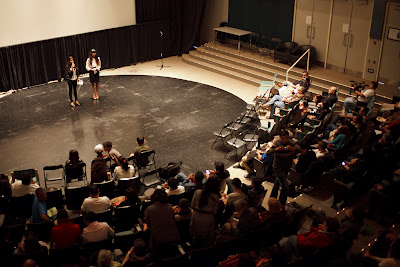 Toronto, ON: The Third Toronto Nepali Film Festival (TNFF) was successfully held on
Saturday March 17, 2012 in Toronto at Innis Town Hall, University of Toronto, 2 Sussex
Ave. The one-day festival attracted 400 audiences from different walks of life, both
Nepalis and non-Nepalis. The festival showcased nine Nepali films from Canada, Nepal
and the US. The annual festival is organized with the goal of promoting Nepal’s rapidly
emerging independent filmmaking industry and adding a distinctive Nepali voice to
Toronto’s cultural landscape.
The film program was followed a presentation and performances
and included a presentation of Toronto-based photographer Mr. Ariel Estulin’s
photographic essay from his travels in Nepal. The photographic essay was followed by a
beautiful Nepali dance performance titled Nepali Fusion by students belonging to
FONATS (Federation of Nepali and Tibetan Students) at York University. The all female
dance troupe consisted of Kneha KC, Dristi Rawat, Rakshya Mahat, Sumee Pandey and
Rizbi Poudel. The dance was followed by musical performance of by Ottawa-based Mr.
Robin Subba. After Mr. Subba, there was another energetic musical performance by
Brampton-based Mr. Aadi Yakthumba. The festival was concluded on a celebratory note
with a group song lead by TNFF volunteers Mr. Janman Jay Ranjit and Mr. Saugar
Sainju, and was joined in by other volunteers and members of the audience.

Nice to hear good things about TNFF – and fellow filmmakers and enthusiasts, keep an eye out for details of submission for next years event. Aim to reach a whole bigger mass than those immediately close to you. Festivals is totally the way forward.

Lex Limbuhttps://lexlimbu.com
Lex Limbu is a non-resident Nepali blogger based in the UK. YouTube videos is where he started initially followed by blogging. Join him on Facebook and follow him on Twitter.
Previous articleBudhathoki Family Await Treatment
Next articleHimalaya Everest Watch by Kobold to Cost $16,500