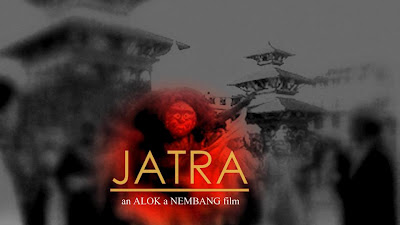 After Sano Sansar and Kohi… Mero director Alok Nembang is now working on an upcoming film titled JATRA. The story of JATRA is being penned by Kumar Bhattarai and director Nembang himself. Unlike Alok’s previous work JATRA is believed to be a step outside of his comfort zone as this love story is apparently said to be packed with action. There very well might be some thrills too.


The photo above was shared on Facebook by Kumar Bhattarai who has previously been involved in Dasdhunga and Mero Love Story. “an Alok a Nembang film” – I hope that’s a typo right there. Kumar Bhattarai who last did the screenplay and dialogue for Mero Love Story was criticised for making the film a bit too Bollywood, I certainly hope that Jatra does not suffer similar fate.


Lastly, Sano Sansar and Kohi Mero (second half) was very slow and it dragged. I hope Jatra is a more efficient viewing and it is like a JATRA, short and sweet with enough impact left behind. Another is, minimal songs maybe? I believe Kohi Mero without the song Sabhda may have made it a little bit better. Hope this movie works well for the team and for the viewers.


What are your views on Alok Nembang’s previous work? Do leave feedback below.


PS. If there’s an item song in the movie, get Jharana to do it 😛