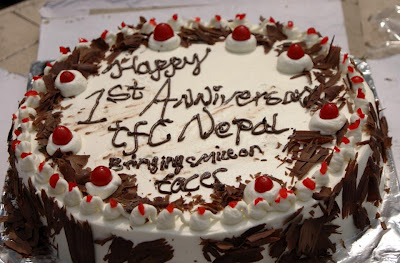 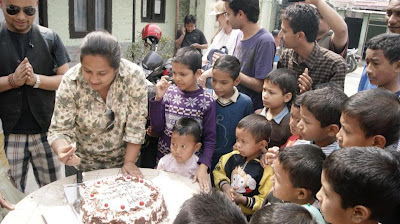 Do you tweet?
If you do then you ought to follow @tfcNepal. If you haven’t already then that’s a tweeting crime right there. Tweet for Cause Nepal (@tfcNepal) recently celebrated it’s first year anniversary on the 24th March at Naya Nepal Apanga Samaaj Kendra where over 20 tfc-ians were joined by 2012 CNN Heroes nominee Pushpa Basnet. The event saw the keen twitter users distribute copies, pencil, erasers and give chicken meat for those currently at the kendra. In just one year @tfcNepal has managed to conduct five missions that consequently has brought a smile and in some way or other given hope for hundreds of those in need.Twitter users who follow TFC Nepal usually donate 0.20 paisa per tweet, however majority of them just make a whole lump donation at the end of each month. @tfcnepal started with the initiation by few twitter users and has now grown to involve more than 500 followers on twitter.

@tfcNepal does not only help those in need but also keeps people like you and me on our toes. Receiving tweets from @tfcNepal each morning is always a refresher as I am informed about the key happenings of that particular day from the past and to latest news from Nepal. Inspiring quotes as well, they can never go wrong.