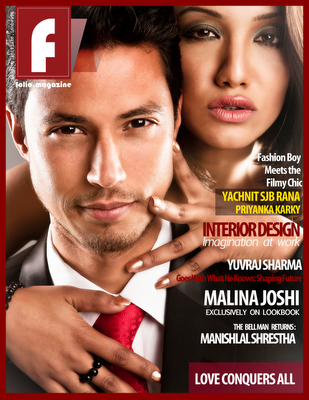 Here are two faces, heavily lusted by both sexes.
You may have seen Yachnit Sjb Rana parading various fashion shows frequently held in the capital or on the fashion feature inside several glossy magazines sprouting rapidly in Nepal but did you know that aside from being a professional model Yachnit is also an engineer at Air Dynasty Helicopter Services. On the upcoming Folio mag you can see him alongside the dusky belle Priyanka Karky. Since her Miss Teen Nepal days, Priyanka has come a long way and won thousands of hearts from adoring fans all over. As an actress she will be appearing in Mero Best Friend, Bhulne Po Ho Ki and 3 Lovers.


PS. This past month I read several Nepali magazines (English) and I was quite shocked to see how poor the content was, yes, the photo feature were well executed but when it came to articles… it was too generic. There wasn’t anything which would make one go, ah’ I’m glad I read that. And some magazines displayed poor English grammar and spelling. I am saying all this because this is someones job. I know I make mistakes all over (left right and centre), however I try my best and at the end of the day, this is not my job nor my career. I hope the magazines improve their internal pages and not just their covers because they really do have a HUGE potential to spread a message, inform, aware and inspire.