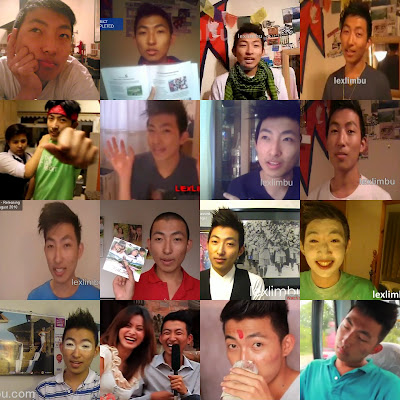 So like, I am finally twenty! I swear… I am not even lying. I remember meeting a Facebook friend in Buddha Bar in Kathmandu last year and he said “Lex, a friend of mine told me you’re 25”, it took me few seconds to pick up my face [dying laugh]. Not amused bro’
I guess it’s all this jibber jabber and the verbal diarrhoea that people hear me say which makes them think I am actually older than what I am. Pimples probably don’t help either. Having a boyish skin was only a blessing that I received during my very early teenage life. Oh the good old days.
YouTube received its very first video from me on the 26th December 2006, a good six years ago. It was indeed a very mellow dare I say, dead Christmas in the Limbu household. Till today, I don’t quite know what I was doing in the video so don’t even ask for aims and objectives. Sharing my online adventure with few “friends” only managed to make them deeply concerned. They feared I was losing my street cred. Oh boy, as if I had any. So you may have guessed what happened. I obviously didn’t listen to my friends; fortunately that has beautifully landed me with over 50 youtube videos. Kerching.
My very first blog post was on Jharana Bajracharya’s engagement [the engagement was called off] on the 1st November 2007, just about a year after my youtube channel. I struggled. In the beginning the blog wasn’t called lexlimbu.com. The thought of having a website by my name then was just kinda a long process of “should I or shouldn’t I”. A lot of “omg, what would people say” ran through my head. I went with my gut instinct. It changed to lexlimbu.com and here we are today, five years later with more than 1000 blog posts. I feel okay you know, not good but okay. But there’s so much more to be done in terms of getting my blog and youtube out to more people.
Things I want to share through my medium are things that will contribute to people’s knowledge. But there’s a fine line somewhere as too much knowledge may be deemed as being boring by the mass. Along the way, I have said ‘no’ many times for blog post requests, video covers, promotions [so on] and as a matter of fact bhannu parda, I wish I had thought about it twice before I said some ‘no’ for some projects. My recent ‘no’ were for offers asking me to star in a Nepali film. If the offered film does go into production, I am sure it’ll become one that will be hugely controversial and hotly debated by thousands. I’ve planned what I’ll do when the film does get its controversial success; I shall sit in my room and play Katy Perrys ‘The One That Got Way’ song. Ha!
Just like these ‘no’, I am guaranteed to have spoken out of context, maybe misinformed and misinterpreted certain situations and events through my 50+ youtube videos and 1000+ blog posts. For that, I have something to say. I am learning. When I visit my post and videos of the past [rarely], I come across such awful English or sometimes just plain ignorance regarding my use of language. And I cannot say sorry for that. A part of growing up online and sharing things is also leaving everyone to see mistakes committed in the past.
That was then, I am now.

Thank you to everyone for their birthday wishes,
Love your kindness and support.
PS. With my taja taja exams marching towards me, I shouldn’t even be thinking about blogging, youtubing or being lexlimbu. Doing two things that are poles apart yet feeling more inclined to the latter, I do want to punch myself at times.
A song that I adore

Lex Limbuhttps://lexlimbu.com
Lex Limbu is a non-resident Nepali blogger based in the UK. YouTube videos is where he started initially followed by blogging. Join him on Facebook and follow him on Twitter.
Previous articleYachnit & Priyanka : COVERED
Next articleGet High In The Himalayas