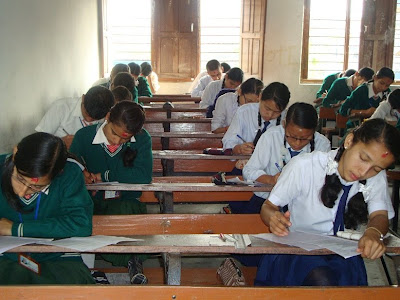 Woah… that figure is not even halfway!
This figure is quite alarming. Especially when compared to last years pass rate which stood at approx 56% according to The Kathmandu Post. Almost 10% downfall from the previous year! Of the 419,019 students taking the examination, a majority of 93,830 received a Second Division pass whilst 17,760 came out with a distinction. Reasons behind the downfall may vary, however Anjali Subedi cites that the absense of pre-test called send-up prior SLC this year may be one reason for the declined pass rate. Securing a whopping 94.9% in this years SLC and instantly becoming an over-achiever is Arun Kalakoti of Biratnagar.
Unfortunately, the news of SLC wasn’t all positive for everyone as 15 year old Pratikchya Sharma of Nepalgunj poisoned herself to death after failing the SLC examinations.
That is sad… RIP
Congrats to everyone for getting through. Study hard.