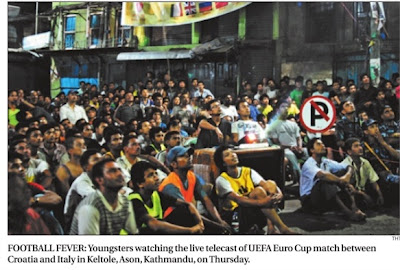 Even though Nepal is not participating in the current Euro Cup 2012, Nepalis are still hardcore football enthusiasts and even statistics prove it. A latest release by Google shows that Nepal has topped the list and become the number 1 country with the most Euro 2012 and Olympics-related searches in the past few months. Our national team has never taken part in any international tournament but we did host the Asian Football Confederation Challenge Cup earlier this year in March. Check out the list below:

Football fever running high! Image above is courtesy of The Himalayan Times. So fellas, which country are you rooting for?

UPDATE: 16/06/2012 – Here are some other publications that have shared the news for further evidence; Silicon Republic, thejournal, Rise of Nepal.