Home nepal Dil Shova Shrestha’s Aama Ghar
Facebook
Twitter
Pinterest
WhatsApp
I finally got around to watching the DISHANIRDESH interview of the lady of the moment, Dil Shova Shrestha. Feeling a little bit guilty for not watching it sooner but better late than never right. The fourty-five minute long interview by Vijay Kumar reveals the story of Dil Shova who opened the doors of her home to the less fortunate roughly fifteen years ago. Since then Dil Shova’s Aama Ghar has become a home to many elderly women and orphaned children from Karnali. Currently there’s approximately eighty-five people in her house. I’m going to shut up and let you watch the video, must must watch. 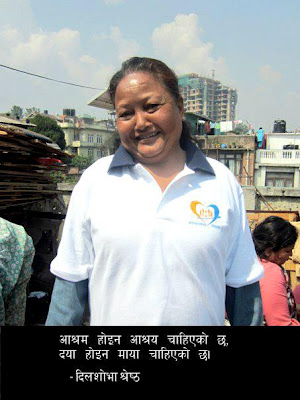 If you watch the video then you’ll come to know that she is in need of Nepali 5 Lakh rupees to keep the house. There has already been groups of people uniting to help Dil Shova by collecting donations in Australia and the USA. Laxmi Ghotane, a member of MUTKI has also set-up an online donation page where she will be collecting donations for the Aama Ghar. The MUKTI team member will be donating the money on her visit to Kathmandu this December.