If there’s one person that everyone’s eager to bump into, see and meet it is none other than our popular Takme Budo aka Wilson Bikram Rai. Wilson who’s been in the UK for nearly three weeks now has completed five shows already. He will be doing his live stand up at LOCK17 Pub tonight in Camden Town from 7PM onwards. I recently caught up with Wilson along with Prawesh Limbu to film for the video interview Ek Chin with Takme Budo / Wilson Bikram Rai. The filming took place in London on 16th August 2012. Prawesh who has previously assisted in the Lex in Nepal videos and Ek Chin with Namrata Shrestha will once again be involved with the post-production. We hope to have the video public on youtube very soon.
Catch him live tonight or at a show near you.

Seeing the rise of Wilson Bikram Rai is simply amazing! It was at the trial screening of the film Saayad in Kathmandu last year when director Suroj Nalbo Subba first introduced Wilson to Prawesh and me. During the meet Wilson decided to share few comedy skits to entertain us. It was that moment when Prawesh realised the potential of Wilson Bikram Rai. We expressed our interest in taking video footages of him to share on youtube, he was positive! Prawesh recorded the videos; VC KO TAAKMA, Dharaney Keto etc etc and uploaded it on youtube just before the release of Lex in Nepal and in no time Wilson’s videos went viral. His character of Takme Budo got a great slot on Meri Bassai and offers started pouring for him from left right and centre. For someone who struggled to seize the limelight for several years, often being the actor in the background Wilson is an example that hardwork, determination and persistence does indeed pay off in the end. His interview Ek Chin with Wilson Bikram Rai shows just that. He’s already entertained crowds in Hong Kong, Korea, Singapore and UK – he will be entertaining more in Brunei, Canada, Germany, (and more countries). It is indeed amazing to see his phenomenal rise. 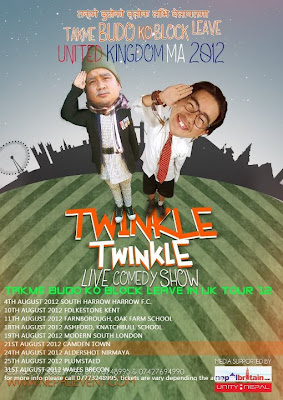