There’s quite a lot of events taking place this month and next. We only have less than two weeks left till the end of October but there’s the CRAZY KENT Dashain Dance Party, Vijaya Dashami party, Kent Live featuring Robin and the New Revolution and Student Halloween Party on the 31st October. Now that is just October.

UK Nepali Bazar + T-FEST Grand Finale
UK Nepali Bazar is back again this year on Saturday 24th November from 2PM onwards in Feltham Assembly Hall. “UK Nepali Bazar was unlike the usual events that bombard our social networking sites or the ad space of Nepali newspapers that circulate in Britain” – that is how I described the event which took place in Farnborough last year. It is a great event for those out of the Nepali communities to attend to see what we have in offer, what Nepalis are doing here and with support and good networking, what we can go together. For the budding entrepreneurs and businesses, it’s another great platform to spread itself. This year, the Bazar is teaming up with UNIQO Creation as the postponed grande finale will also be taking place on the same day. UNIQO Creation are also said to be launching their PROJECT UNITED very soon. The project will focus on the winner of the musical talent contest and his or her journey to unite people in Nepal through talent. Worth attending, definitely! 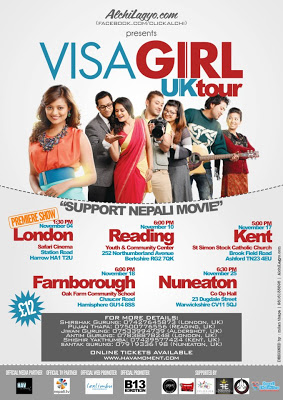 Nepali film VISA GIRL will be premiering in the UK on Sunday 4th November in Harrow’s Safari Cinema from 1.30PM onwards. The film which stars Reecha Sharma, Karma, Vinay Shrestha and more has been brought over to the UK by AlchiLagyo.com. Aside from London, the team will also be screening the film in Reading, Ashford, Farnborough and Nuneaton. Tickets are already on sale and can be bought online. The film looks fresh, fun and friendly. Watch it somewhere near you.
Join Lex on Facebook!
Read More:
CRAZY KENT – DASHAIN Dance Party
Durga Gurung Crowned Miss Nepal 2012
UK Nepali Bazar 2011
Robin and the New Revolution in UK
Halloween Party by 9Seven7