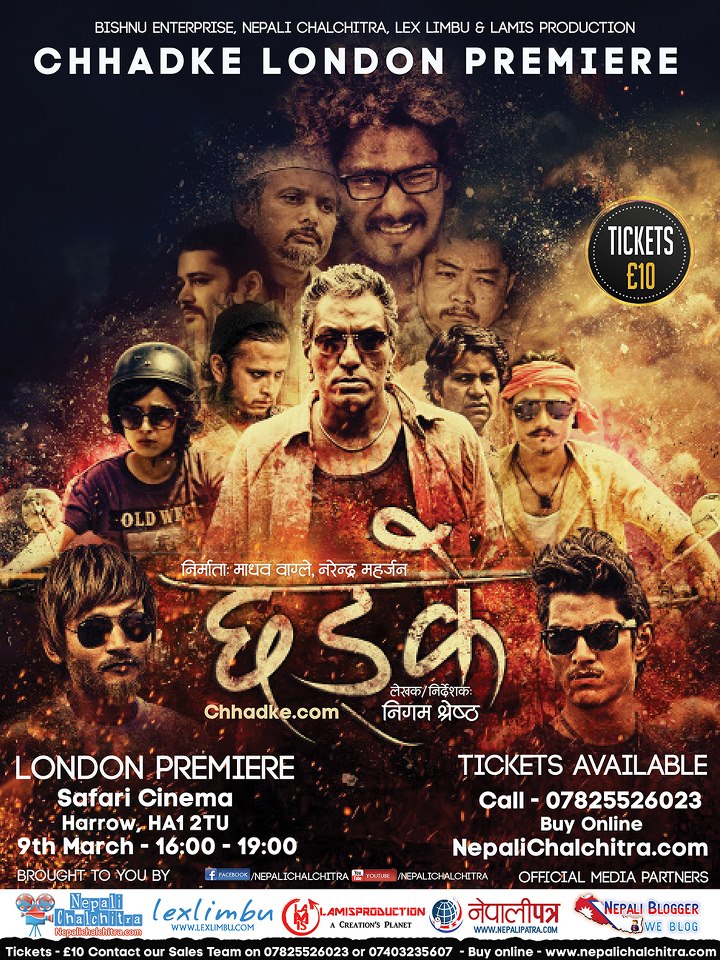 Get ready to book the Saturday March 9th off because CHHADKE is all set to be screened in London. The film which will release in Nepal on the 22nd February will also have screenings in Australia and several other towns and cities in the UK. The first London show of CHHADKE will take place at Harrow’s Safari Cinema from 4PM onwards. Please be promptly on time because you do not want to miss bad boy Robin Tamang making his Nepali film debut. In addition to the rock legend, the popular duo from LOOT Saugat Malla and Dayahang Rai will be seen together in Chhadke. You can also catch Namrata Shrestha driving a Royal Enfield and waving guns like theres no tomorrow. The talented cast include Arpan Thapa, Prateek Raj Neupane, Sunil Pokharel, Bipin Karki, Nikun Shrestha, Kaameswor Chaurasiya and Safal KC. The film has been directed by Nigam Shrestha and produced by Madhav Wagle, Narendra Maharjan and Ras Tandav.

Bishnu Enterprise Pvt Ltd who have acquired the UK rights for Chhadke will be screening the film in Ashford on the 23rd February, 2013. The LONDON show is being managed by Nepali Chalchitra, Lamis Production and myself. To get your hands on the tickets, please call the numbers on the poster or you can purchase tickets online at NepaliChalchitra.com Very reasonable price at £10!

The trailer is a must watch! While you’re at it, check out the soothing Ek Ekan Dui song.

Lex Limbuhttps://lexlimbu.com
Lex Limbu is a non-resident Nepali blogger based in the UK. YouTube videos is where he started initially followed by blogging. Join him on Facebook and follow him on Twitter.
Previous articleGet Ready to FIGHTBACK
Next articleInter-University Nepali Dance Competition 2013