Miss Nepal US In Controversy AGAIN

Even before the grand finale, Miss Nepal US is already in heated controversy!! Then again, the grand beauty pageant is no stranger to such speculations, pull-outs and the blame-game. From the very first year, Miss Nepal US has been plagued with various setbacks whether it was the news of Gauri Malla or the Miss Nepal USA title dropping the ‘A’ and re-branding itself as Miss Nepal US after some legal issues. A group of former Miss Nepal US contestants have issued a public letter asking everyone to boycott Miss Nepal US. The letter has been signed off by several names so it’s pretty much for real and former choreographer for Miss Nepal US 2012 Sarah Gurung has also supported the boycott. The pageant which will be choreographed by former Miss Nepal Malvika Subba will take place on 17th August in New York.

The letter sheds some shocking insight into the pageant and the organization committee ranging from false advertisements, poor management and communication to an apparent vote rigging. If true, then it sounds very distressful then again all this is so common with Nepali beauty pageants. Whether its Miss Nepal UK, US or Miss Nepal – every year and every pageant seems to come attached with such issues. 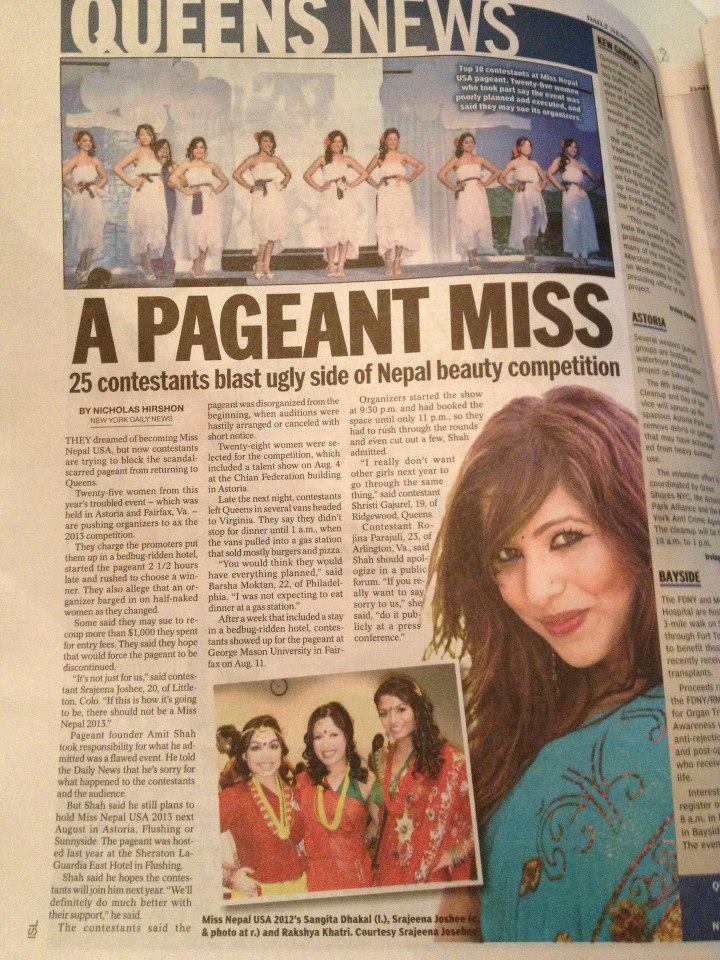 On the behalf of the participants and their family of Miss Nepal US(A) 2012, this letter kindly invites your attention to the misconduct and the false advertisement of the Miss Nepal US(A) event in 2012. The event was poorly and unfairly executed which also includes threatening the health of the participants due to improper housing conditions, failure of accommodation of food on time and lack of immediate medical direction when needed.

Miss Nepal US(A) was not conducted as advertised to us contestants. The first false advertisement started off with the number of finalists they allowed to participate in the program. The organizers had claimed that they would only have 20 finalists; however they ended up the event with 28 finalists in order to gain the additional $8000 from the eight extra finalists. They also made a false announcement claiming to have more than 100 applicants to get the media attention but they only had 28 applicants. To our shock, despite Mr. Amit Shah (The CEO) and other organizers being aware of the fact that one of the applicants was married in Nepal, still choose to include her as one of the finalist which is absolutely against their own requirement clearly reflects the lack of integrity of the organization.

Additionally, the whole training schedules were diverted to go around places in order to advertise for the organizer sponsors instead of providing the training that were promised during the application. . The participants’ were sometimes fed at a gas station and the hotel that the participants had to stay in had bed bugs.One of the contestants had to participate in the finale with a swollen face due to lack of treatment on time. Similar case also occurred to another finalist, when the second day of training, the contestants had to get their blood drawn for the life insurance policy which in fact was unnecessary for all the participants to go through as the insurance was only for the winners one of the contestant has a swollen and bruised antecubital space which wasn’t addressed by the organizers until after a week.

Despite these outlined issues, each contestant considered the organizers’ everyday apologies and forgave in hopes of a grand finale as promised even when some of these issues were directly affecting participants well being. Unfortunately, the Grand finale of Miss Nepal US(A) 2012 turned out to be an incomplete, poor and disastrous event to the participants as well as the audiences. However, the audacity of the organizers to advertise the event as a success highlighted the organizers lack of accountability and their intention to deceive future participants through false advertisement, which reinforces the fact that the whole pageant is nothing but a scam.

The finale was an incomplete event, which was executed poorly and unfairly. The show started more than 2 hours late and ended abruptly without completing the rounds that the participants were trained to be judged from. After the first round (cultural round), the organizers decided to change the whole time schedule for the show due to the lateness of the program. Due to this, all the work that went into practicing and perfecting the choreography was put in vain as all the rounds were cut shorter or canceled as mentioned earlier. Also due to the cancelation of certain choreographies, many of the items which were required purchase by the contestants were not put to use. But this was not the end of mismanagement; one after the other the program took a new toll. As witnessed by the event choreographer, Sarah Gurung, two members of the organizing committee, Mr Sarad Yuvraj Singh and Sailesh Shresta had taken the score sheets and manipulated it with new tallied numbers and made up a Top ten list without even adding up the scores given by the judges present.

At the same time, even though the CEO of Miss Nepal, Mr Amit Shah was aware of this, he was not concerned about the actions of the two member of the organizing committee, instead he was more concerned about finishing the show on time due to the lateness of the show. And after the top ten finalists were asked individual questions, the final winners were announced based off of 10 different individualized questions and answers. How was it even possible to choose the top 3 based on 10 different questions? Moreover, on the website it clearly states that “The winner for this beauty pageant will be chosen based on their personality, overall attitude, public speaking skills, talent and their ability to form intellectual opinions on issues of national and international concern ask by jury”.

Now the main issue was that the judges were called upon the stage within minutes after the top ten questions were asked to award the winners. This raises a huge question on the authenticity of the results as it is quite impossible to do the calculations for 10 different contestants from 10 different judges in such a short period of time. They did not make this transparent at all as the score sheet was just being passed around from the judges to the organizers not in front of the audience like it should have been but behind the curtain and the winners were announced promptly.

Apart from these, there were several audiences who spent $100 dollars for their VIP ticket, which was promised to include a red carpet entrance, a meal, and on site voting for their favorite contestant but none of those actually happened. This whole event was indeed a big scam.

After the event when the participants tried contacting the CEO Mr. Amit Shah asking for clarifications, he just said how he believes that some team members took advantage of the situation and that he thinks that the mistake was in judges’ selection as some of the judges had no clue. It is even worse that instead of accepting his mistakes he was blaming such respected personalities.

The Participants always respected the team members like their own family but it is disgusting to find out that one of the organizers Sailesh Shrestha whom they treated like a brother had to be taken out of one of the contestants room drunk when she complained to the choreographer and they had to use the Bikrant Shrestha’s ( official photographer) help to get him out of the room. Apart from that, he called several participants and choreographer Sarah Gurung many times in the middle of the night and when he was being ignored he started calling from private numbers.

During the night before the finale, a party was organized for the contestants and the staff. Even though the organizers were well aware of the underage participants, alcoholic beverages were being served. When the event choreographer, Sarah Gurung, requested alcohol to be excluded, the event manager Sarad yuvraj Singh and Sailesh Sherestha, disputed and instead replied by saying, “we need to have alcohol and dance and put up pictures on social media to show how fun and exciting it is to be part of Miss Nepal US(A).” In other words, the party was held in order to falsely advertise the organization, even if it meant to let the underage contestants drink without parental consent.

Miss Nepal US(A) claimed to serve as a platform for youths to promote the richness of Nepali culture and reward the hidden talents. But in contrary, they used us a medium to put on a show and make money. They cared less about the effort and dedication we put into it. Even though some of us did make it to the Top 10 finalist and some of us did receive a subtitle, due to the planned out winners and title holders by the organizers, we are not fully satisfied for there were other contestants who were more deserving.

After hearing all that, we are hopeful that you have come to understand our situation. Even after all this it is a shame that the same organizing committee is yet doing another year of Miss Nepal US(A) with even more false advertisement and enticing offers and prizes. Knowing all this, our dignity and pride doesn’t allow us to let this happen again and let another single fellow Nepali female go through the same road of distrust and misery that we did.

Once again, we are not against Miss Nepal US(A) or the previous winners, we do believe that it can work as a great platform to uplift Nepali culture and encourage youths if organized by the right team but we absolutely cannot trust the same organizing team that includes members like Sailesh Shrestha and Sarad Yuvraj Singh. Please boycott this event to prevent these unfortunate events and stop the ill witted people from doing the same thing and exploiting more Nepali women.

We would heartily like to thank you for your patience and lending us your ears and time all along. We are extremely hopeful that you would help us in this matter.

Also, it has come to our knowledge that they were begging some of the girls to just participate for free because they were desperately in need of participants. And some of the contestants even received calls from the organizers saying if we can get some girls to participate they will at least get a title for sure ! And not to our surprise only 16 people applied this year and they are all selected as finalists but just wanted to warn all the contestants, families and sponsors.Even after knowing all this if you still would like to participate or send your daughters we can’t really do anything.

Have you been to a Miss Nepal US event? Let us know your views!

Lex Limbuhttps://lexlimbu.com
Lex Limbu is a non-resident Nepali blogger based in the UK. YouTube videos is where he started initially followed by blogging. Join him on Facebook and follow him on Twitter.
Previous articleLAYASUTRA Performing At o12 Bar & Grill On July 28
Next articleFormer Miss Nepal US Sujita Basnet in Nepal