Twenty year old Gianni Subba is a rising name in mixed martial arts (MMA). Subba who has spent majority of his life living and studying in Malaysia boasts of an exotic heritage with a Nepali father who was raised in Kalimpong and Kathmandu and mother from Malaysia. The Hawaiian born fighter who is only three fights into his career has already attracted attention in plenty. Subba is currently fighting professionally for ONE Fighting Championship, one of Asia’s largest MMA organizations. The rising fighter currently divides his time between home in Kuala Lumpur and training in Phuket, Thailand.

There is only one way to go for Gianni and that is up. I’ve managed to catch up with him at a really good time in his life and who knows maybe next time he’ll be at the top of the game!

What does your name GIANNI mean?

GS – I think it means God is Gracious, my mom and dad are very creative and unique people haha’

Majority of the readers of lexlimbu.com happen to be from Nepal or are Nepalis living across the globe, can you explain your Nepali heritage and describe about the time you lived or visited Nepal?

GS – I am Nepali on my father’s side hence the surname Subba and my mom is Malaysian. My dad was raised in Kalimpong and Kathmandu. My grandfather was an MBE recipient from the British Gurkha 2nd Gr. His name is Major Henry Daniel Subba. The last time I was in Nepal was back in 2006 and we went around sight seeing for a week. Did the usual Kathmandu, Chitwan and Pokhara trip. It was wonderful.

Nepali food that you enjoy?

GS – I love all Nepali food! Momos,Thukpa and of course dhal, bhat and masu.

What languages do you speak and can you speak Nepali?

GS – I can speak three languages, English, Malay, and Mandarin. Unfortunately I do not speak Nepali, I want to learn though!

Where did you do your schooling?

GS – I went to school in Malaysia till I was 14 then high school in the states (Salt Lake City) and a year of college in Hawaii.

For those that are completely oblivious to who you are and what you do, how would you describe yourself to them?

GS – Currently I am living in Kuala Lumpur, Malaysia, I also spend a lot of time in Phuket, Thailand to train for my fights. I am fighting professionally for ONE Fighting Championship, one of Asia’s largest Mma organizations and have a record of 3-0. 4.

When you are not in the ring, how do you like to spend time?

GS – When I’m not training I like to hang out with my family and watch movies, watching movies helps distract me from the stress and tension of training haha.

If you had to describe your personality using 5 words what words would they be?

Your biggest achievement in the ring till date?

GS – Biggest achievement to date is defeating a much more experienced Singaporean fighter in Singapore for my professional Mma debut.

GS – Oreos! haha and also I tend to procrastinate.

GS – Travel the world, and the seven seas.

After doing a quick sweep through the internet, I learned that your brother Keanu also fights. How did you guys get into fighting, was this from your dad/mums side?

GS – Yes Keanu also fights, he won the national Malaysian amateur Mma title in June this year! We have always been competitive and there is no rawer form of competition than Mma. I think it has more to do with my dad’s side, my grandpa served in the British Army.

Do you have any other sibling who’s going to fight soon?

GS – I also have an elder sister but she is not into Mma haha. Keanu might have a fight in December.

What’s next for you?

GS – Right now I am focusing on my MMA journey full time, training for my next fight which should take place early 2014. 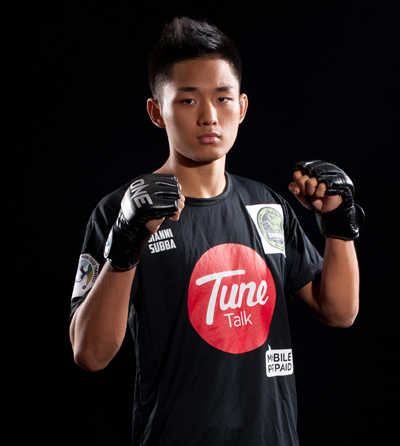 Lex Limbuhttps://lexlimbu.com
Lex Limbu is a non-resident Nepali blogger based in the UK. YouTube videos is where he started initially followed by blogging. Join him on Facebook and follow him on Twitter.
Previous articleGurkha Hunger Strike Ends On Day 15
Next articleLaxmi Gurung Collects Over Nrs 1 Lakh For AAMA GHAR