LOOT Director Nischal Basnet’s second film TALAKJUNG VS TULKE will be coming to the UK! The highly anticipated second film from Basnet will be opening it’s doors to Nepali audiences in Aldershot and the nearby areas on 14th of November at Princes Hall from 5PM onwards. The UK screening is being organized by LG Association UK.

“Talakjung vs Tulke” is a dark comedy with the main protagonist, a Nepali common man, in search for his identity against the backdrop of the conflict set during the decade-long Maoist insurgency. The film stars Khagendra Lamichhane in lead and Dayahang Rai, Richa Sharma, Shusanka Mainali, Rabindra Singh Baniya, Prakash Ghimire and more.

Nischal Basnet’s break-out superhit LOOT has played a major role in opening up the screenings of Nepali films in the UK and re-engaging Nepalis to watch Nepali films. The Saugat Malla starrer LOOT was also screened at the Princes Hall in Aldershot during the time of it’s release. Talakjung vs Tulke opens in Nepal on Friday October 31st.

Looking forward to the release!! 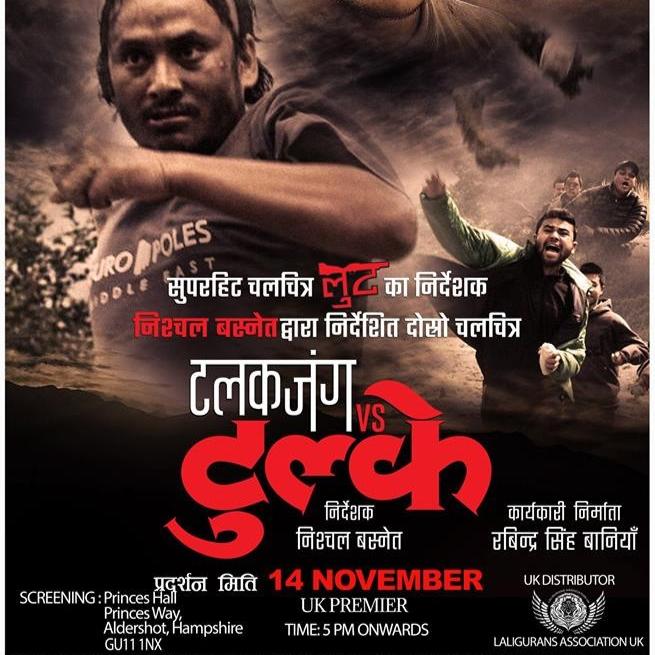 Lex Limbuhttps://lexlimbu.com
Lex Limbu is a non-resident Nepali blogger based in the UK. YouTube videos is where he started initially followed by blogging. Join him on Facebook and follow him on Twitter.
Previous articleChitwan Break For Prabal Gurung!
Next articleHimalayan Java Now in UK!