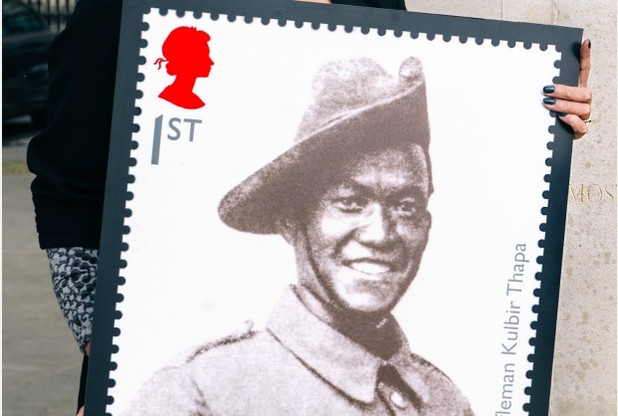 Marking the outbreak of the First World War – the Royal Mail has also honoured the GURKHAS with the issue of a new stamp. The “stamp features Rifleman KULBIR THAPA who was serving in 2nd Battalion, 3rd Queen Alexandra’s Own Gurkha Rifles when his unit attacked German lines on September 25, 1915, the first day of the Battle of Loos. Though wounded and separated from his battalion, he was able to reach the German front line. Finding an injured British soldier nearby, Kulbir stayed with him all day and night, before carrying him to safety the next morning. Despite his injuries, he then returned to the German trenches and rescued two fellow Gurkhas. For these selfless acts of heroism, Kulbir became the first Nepalese Gurkha to be awarded the Victoria Cross”, you can read more on the Staffordshire Newsletter.

Absolutely Fabulous actress and Gurkha activist Joanna Lumley spoke about the Royal Mail Gurkha stamp honour by sharing “In World War One Gurkhas ended up far away from their homeland, men used to crisp mountain air found themselves stuck in muddy trenches in Flanders. But they faced everything with fortitude. So I am glad a Gurkha is being honoured on this stamp, just as our citizenship campaign recognised the loyalty and sacrifice Gurkhas have given and still give to Britain.”

Lex Limbuhttps://lexlimbu.com
Lex Limbu is a non-resident Nepali blogger based in the UK. YouTube videos is where he started initially followed by blogging. Join him on Facebook and follow him on Twitter.
Previous articleJackie Chan Supports Nepal Earthquake Relief Fund
Next articleD.I.Y Nepal – Stories of Nepal Feature