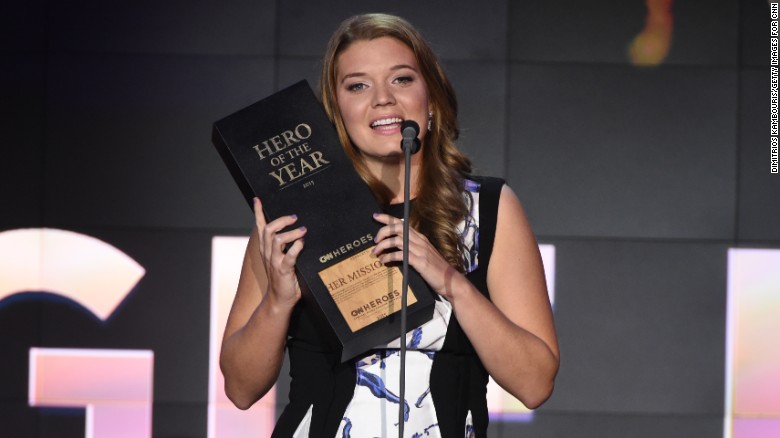 Maggie Doyne’s inspiring story continues to captivate and her work through BlinkNow Foundation in Nepal has won her the CNN HERO OF THE YEAR award in New York on Tuesday evening at an event in New York. Doyne who comes from New Jersey made a life-changing decision to return to Nepal after a gap-year stint to start her own children’s home and education centre in Surkhet. The story of Doyne and her savings from baby-sitting has travelled to many talk shows, universities and countless publications; it’s an amazing action that continues to inspire and instill hope.

Maggie will receive $100,000 for BlinkNow in addition to the $10,000 that each Hero received for being named in the Top 10 list. Well done to the entire network of supporters for voting for Maggie. You can catch the TV premiere of CNN HERO on Dec 6. The twenty-nine year old BlinkNow founder wore a dress by Nepali designer Prabal Gurung.

“If you had told me when I turned 18 that I was going to be the mom of 50 kids, I would have told you that you were totally crazy. And I am. And to my kids, I love you so much. Don’t ever forget how much I love you,” Doyne said Tuesday. “And to the country of Nepal, thank you so much for loving me and accepting me as a daughter welcoming me into your country.

“And to all of you in this room and who are watching, please, please remember that we have the power to create the world that we want to live in, just as we want it. And that’s what all the Heroes here have done tonight.”

Past winners of CNN HERO from Nepal include Anuradha Koirala and Pushpa Basnet.

Lex Limbuhttps://lexlimbu.com
Lex Limbu is a non-resident Nepali blogger based in the UK. YouTube videos is where he started initially followed by blogging. Join him on Facebook and follow him on Twitter.
Previous articleThe Male Model From Samriddhi Rai’s PRAYAS Video!
Next articleKabaddi Kabaddi On Nov 27!