How Nepal Fell In Love With Prince Harry

Note: Photos are in random order; please do scour the web for more photos, videos, reports and statements from his speeches.

In early January, I wrote a blogpost announcing Prince Harry’s trip to Nepal in Spring and described him as UK’s favourite Royal. Just few days into his Nepal tour which started on Saturday March 19th, Prince Harry proved to be the favourite for many across Nepal. His five-day tour kept him occupied and meeting people from Terai to the hills, a visit to Bardia National Park, seeing the work by WWF, earthquake relief camps by Red Cross, meeting college students, women, young girls and boys, politicians, Gurkhas, visiting schools and hospitals to even playing a game of volleyball and playing holi! People have noticed the small things from how he’s trying his best to eat with his hands (in Lamjung), being respectful by taking his shoes off when entering a temporary relief tent and his approach to addressing sensitive issues. Comparisons with Nepali politicians and royals are floating across the web but let’s leave that aside.  #HarryinNepal has definitely been trending on the newsfeeds of Nepali people and friends of Nepal all over. His Royal Highness also had time to grab dinner at one of Kathmandu’s trendiest restaurant, MEZZE in Durbar Marg. I think I nearly lost my marbles when social media friends started tweeting about spotting HRH dining in a table next to them or seeing him casually walk through Durbar Marg. #WTF

#HarryinNepal has also been making a splash on British television to newspapers. His entourage clearly has a very well hand-picked team of journalists, reporters and photographers who feed his activity to the webosphere by the minute. Whether it’s updating from the village in Lamjung or the the dense Bardia jungle, various official Twitter handles including @KensingtonPalace have been working round the clock to communicate the activity of the Prince to the world.

On the evening of 23rd March during a reception at the British Embassy Kathmandu, Harry announced he would be spending an extra six days in the country to assist with an earthquake relief project with Team Rubicon UK. The Prince is already in Leorani village and has even shared exclusive images which he personally took and supplied captions for, now available to view on the official verified page of The British Monarchy on Facebook.

Prince Harry’s official tour to Nepal and this new extension of six days is an amazing promotion for the country as not only the UK but media outlets from other countries such as Australia, New Zealand and Canada have been following his activities enthusiastically. Here’s to hoping that the message that Prince Harry shared to people to visit Nepal, will be heard and followed by millions across the globe. 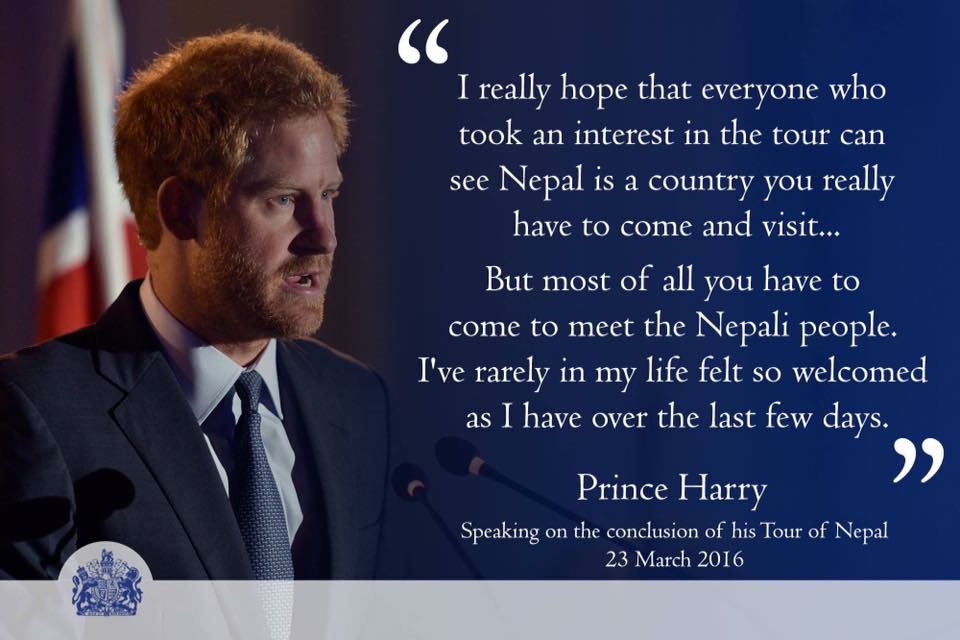 “The people I have met and the beauty of this country make it very hard to leave. Thankfully however, I’m not leaving just yet! I will be spending the next six days in a remote region with a charity called Team Rubicon. The team I’m joining will be working with the community to rebuild a school damaged in the earthquake. I’m so grateful to have this opportunity at the end of my official tour to do my small bit to help.” – Prince Harry

PS. He arrived in Nepal on Qatar Airways. I thought that was pretty interesting as I thought he would’ve requested for a private charter and arrived via British Airways. Kudos Harry!

Lex Limbuhttps://lexlimbu.com
Lex Limbu is a non-resident Nepali blogger based in the UK. YouTube videos is where he started initially followed by blogging. Join him on Facebook and follow him on Twitter.
Previous articleKo Nepali? – Video and Photo Competition
Next articleParas Khadka’s Video Message For Nepalese in UK!