The online world is currently blowing up right now after Nepali director Aneel Neupane penned a letter on his Facebook wall about his short-film BOB which is freakishly similar to Shirish Kunder’s KRITI. The director writes “I’m angry not because Mr. Shirish Kunder practically stole the plot and made it into his film. I’m angry because We didn’t even have lunch money while shooting BOB, and a spot boy for Kriti probably made more money than BOB’s entire budget. My team and I didn’t work our asses off just so some rich dude from India could turn it into this and get away with it. That’s just not fair.” 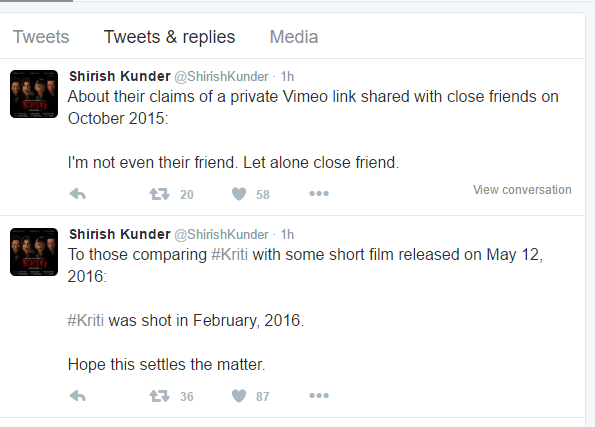 Indian director Shirish Kunder has taken to Twitter just recently to share “To those comparing #Kriti with some short film released on May 12, 2016: #Kriti was shot in February, 2016. Hope this settles the matter”. In a second tweet Kunder added “About their claims of a private Vimeo link shared with close friends on October 2015: I’m not even their friend. Let alone close friend”.

One can be inspired and respectfully credit the inspiration but to lift another’s idea and credit as their own is disrespectful and really puts their art and creativity to question. It’s not nice to see Nepali filmmakers copy Bollywood and Hollywood, likewise it’s not nice to see how Shirish Kunder has literally lifted the story of Aneel Neupane’s BOB.

You can read the full statement by Aneel Neupane here:

“My name is Aneel Neupane and I’m a filmmaker.
My team at Jazz Productions and I worked super hard to make our latest release BOB. We gave our blood and sweat to this project. We had a super hard time finding anyone to fund this project, so we pleaded our friend Tejaswee Rajthala (Jazz Productions Australia) to invest and he did. But We were constrained by the budget limitation of NRS. 50,000 (32,000 Indian Rupees). It was not a lot to go on with, but I’m personally super grateful to the whole cast and crew for believing in the story, volunteering and making it possible to create this film in that limited budget.

We had the film ready in October 2015. I had uploaded it on Vimeo as a private video to share it with close friends. You can see here (https://vimeo.com/145062291) that the video is 7 months old. We finally released it on youtube on May 12, 2016. As of right now, there are 3033 views. Although that’s not a lot of views, I have been getting a lot of messages and amazing feedback from so many people! Thank you all for appreciating BOB. Your response made me feel like all the effort and sleepless nights were worth it.

However! (Plot twist here)
Yesterday (June 23, 2016), I woke up to find Kriti (http://bit.ly/28RiRXB) on youtube. Initially, I thought maybe the first few frames, the setting and characters resembled BOB. I thought it was just a co-incidence. I was actually excited to watch a short film starring Mr. Manoj Bajpayee (A great actor whom I admire a lot!) and Neha sharma (whom I’ve had a HUGE crush on ever since I saw her in the movie Crook). As the movie progressed, I was shocked to find so much similarities.

Now, I have no idea how to go about on this. I’m angry not because Mr.Shirish Kunder practically stole the plot and made it into his film. I’m angry because We didn’t even have lunch money while shooting BOB, and a spot boy for Kriti probably made more money than BOB’s entire budget. My team and I didn’t work our asses off just so some rich dude from India could turn it into this and get away with it. That’s just not fair.

On the plus side: In today’s Movie Industry, so many Nepali films are being made that are “inspired” from Bollywood. It feels like most Nepali Filmmakers just sit and watch of a couple Bollywood movies and mix the plot together to make one crappy Nepali film. And my film was able to inspire A-Class Bollywood actors and filmmakers. I think that’s a win for Nepal. It’s nice to know that a smalltime rookie filmmaker from Nepal was able to inspire Big Time director and actors in Bollywood.

Now, honestly, I’m clueless as to what I have to do next. If I take the fight to them, I don’t think I’m equipped financially or otherwise. It would just be a tiny voice screaming from far away for them. And a lot of people told me that they will just get away with it as they have by ripping off of numerous other films from all over the world.

It would be nice if you guys would help report the video on youtube. 🙂

Lex Limbuhttps://lexlimbu.com
Lex Limbu is a non-resident Nepali blogger based in the UK. YouTube videos is where he started initially followed by blogging. Join him on Facebook and follow him on Twitter.
Previous articleCatch Up With Samriddhi Rai’s SAMMY ADVENTURES Here!
Next articleModel Varsha Thapa Writes About Her Days Of Struggle