HOUSEFULL Start For LOOT 2 In The UK!

The premiere of LOOT 2 in the UK took place at the Princes Hall, Aldershot on Saturday February 25 with the stars Saugat Malla and Dayahang Rai. The event by Gurkha Warriors was a housefull affair with a red carpet limo arrival. Inside the packed screen, Ambassador of Nepal to the UK Durga Bahadur Subedi shared brief words about Nepali arts and cinema followed by Sarala Thapa introducing the two actors on stage.

Few lucky fans were able to come on stage and ask a question to the Nepali cinema heroes. It was a bit unexpected to have one fan on stage ask Saugat Malla regarding his choices of films and why he has appeared in so many films that simply hasn’t worked well. Mr Malla handled the question very well. Oh and another fan asked if the actors could say their popular dialogue from the film… lol. If you’ve followed interviews of the actors then you’ll very well know that they simply won’t entertain requests of fans/interviewers who ask them to repeat a dialogue. I guess only Rajesh Hamal does that. No shade intended. 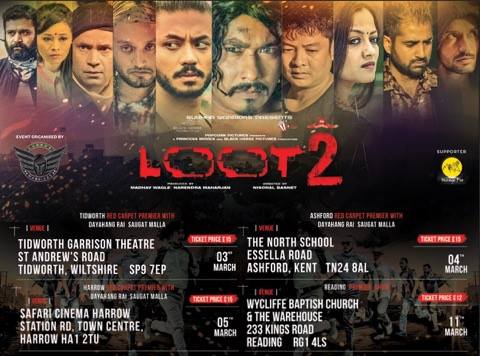 The Aldershot screening was followed by a housefull screening of LOOT 2 in Folkestone on Sunday 26th February. The film and the two actors will grace the premiere at Tidworth on March 3rd, Ashford on March 4th and Harrow on March 5th. The screening in Reading will take place on March 11th, unfortunately the actors will not be at the screening.

Lex Limbuhttps://lexlimbu.com
Lex Limbu is a non-resident Nepali blogger based in the UK. YouTube videos is where he started initially followed by blogging. Join him on Facebook and follow him on Twitter.
Previous articleNiti Shah And Sangita Magar’s SUSHI FOR CAUSE Raises Nrs 31,444!
Next articlePHOTOS: How Priyanka Karki Turned 30!