The UDHREKO CHOLI flame Sushma Karki will be setting the stage on fire with her sultry moves across the UK during the Dashain festive period. The live event will feature the Bindas actress Sushma Karki alongside the very well known Kali Prasad Baskota. Baskota has recently hooked millions across Nepal and overseas with his role as one of the judges of the widely watched NEPAL IDOL! Baskota is well known for his hits from Nira, Jaalma from Resham Filili to the more recent Ajambari from Gangster Blues. Lastly, singer Hemant Rana who had us weeping with his tearjerker song SAILI will also be performing alongside Kali Prasad and Sushma Karki! What a line up! Hemant Rana will most likely set the scene for the evening with his timeless songs such as Laija Re to Saiyeu Juni followed by Kali Prasad’s energetic numbers with Nira and Jaalma, only to be wrapped off by Sushma Karki’s performance in Udhreko Choli! It would be amazing to see her perform in Thamel Bazaar from LOOT 2! Who knows, maybe she might!

You can catch the Bijaya Dashami Subhakamana Sajh by Shree Siddhartha and Nepalese Entertainment in Aldershot, Harrow and Reading. Advance tickets for the event are priced at £15 with the door sales at £20. The hosts for the evening will be former Miss UK Nepal Nia Dewan and Madhu Sudhan Thapa. 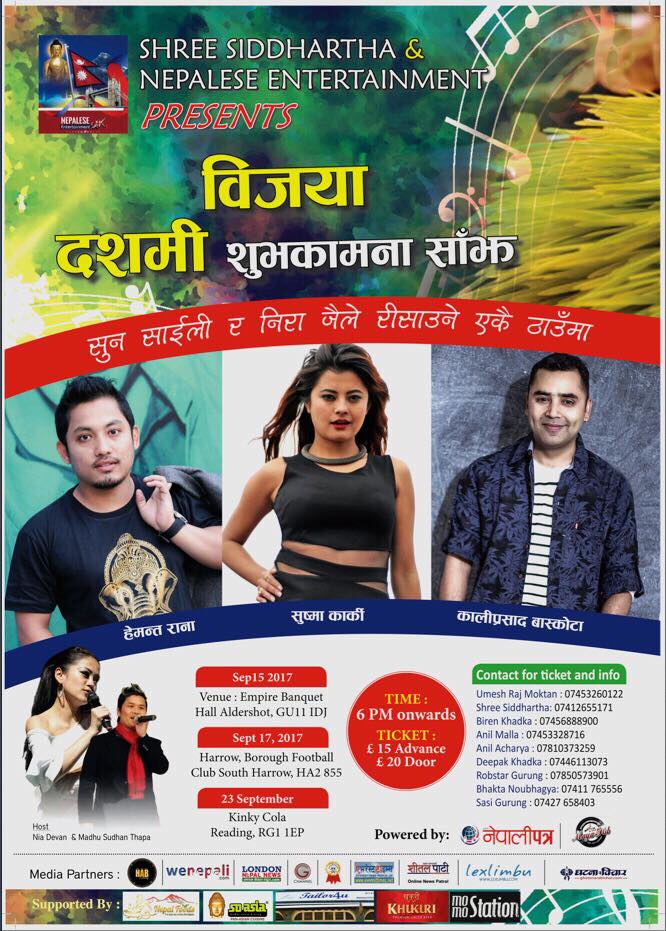 Lex Limbuhttps://lexlimbu.com
Lex Limbu is a non-resident Nepali blogger based in the UK. YouTube videos is where he started initially followed by blogging. Join him on Facebook and follow him on Twitter.
Previous articleHeli-Air Nepal Soon In Pokhara Skies!
Next articleWhen The Bindass Sushma Karki Bumped Into Salman Khan!