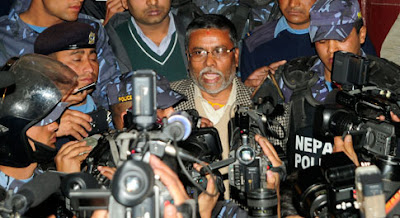 Communications Minister Jaya Prakash Prasad Gupta has been sentenced to 18 months in prison for accumulating wealth beyond his income and abuse of power. Conviction of a politician in a corruption case is quite new to Nepal and Mr Gupta has paved way hopefully for many more ministers in the days to come. Nrs 22,000 is believed to be the amount which Gupta had in his savings before he started the post of press adviser to then Prime Minister Girija Prasad Koirala back in 1992. His assets including properties, land rover jeep and a Sunny Nissan car is likely to be seized by the court as well as the freezing of his accounts.

84 Lakh rupees is approximately £67,500/$106,000!!! That’s sooo much!!! It’s good to see this happen but doesn’t this just make you wonder how much other ministers who have higher positions than him have been earning stealing! Also, 18 months sounds a bit too relaxed for an amount so large, I doubt he will eve pay off the fine thanks to our country’s lenient ways! Corrupt minister Gupta won’t feel too alone at the Dilli Bazaar jail as he has few other minister friends who have ended up there just like him. Former minister Chiranjivi Wagle was sentenced to five years in prison on corruption charges on 15th March last year and more recently former minister Shyam Sundar Gupta was welcomed as an inmate on the 17th February for an abduction case of a businessman.


YAY or NAY? What do you make of this news?