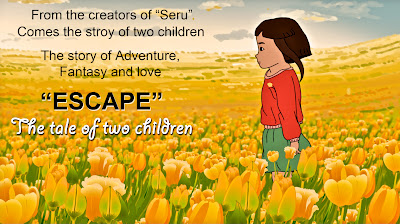 So the creators of ‘SERU’ the Nepali animation are planning to start work soon on a animation titled The Tale of Two Children which will also be supported by a book ahead of the video release. The plan is to make ‘The Tale of Two Children’ an all out full movie! If they stick to their words and bring out the product on time then it’ll possibly be the first full animated Nepali film. Sounds good, but before that they will be launching a book version of the film.

Now the beauty of modern day media is, you can have be involved in the movie. Escape Animation have kick-started a fundraiser campaign on IndieGogo, similar to that of HIGHWAY, but here the goal is to raise $3000 USD. The money raised will go towards the creation and publishing of the book ahead of the release of the film and towards the making of the film as well. Dealing with incessant amount of loadshedding must be quite challenging for the animation makers, so your every few dollars or pounds will highly be appreciated. Surely.

Check out the video below of Pranaya Shakya telling you the story of Escape Animation and it’s plan for the future.

This demo song of ‘Remember’ has vocals by youtuber Sunil Garbuja and music by Bishal Kirawa.

Donate to The Tale of Two Children (Receive Rewards)