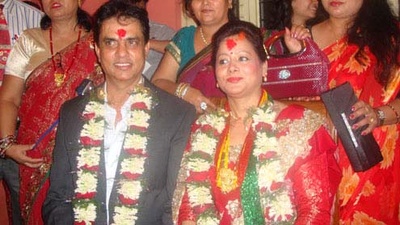 One half of the popular Maha Jodi Hari Bansha Acharya has tied the knot once again! This news comes after the death of his spouse more than a year ago (April 2011). The new Mrs Acharya, Ramila Pathak hails from Butwal, West Nepal. The small wedding ceremony took place at a close relatives of the brides in Gongabu on Thursday evening. It is said that the couple have a 10 years age gap between them. This marriage comes as a second marriage for both the couple as even Ramila was married until she lost her husband in an unfortunate accident ten years ago. She has a 21 year old son from him. For Hari Bansha, he has two sons from his first marriage; Trilok and Mohit.
CONGRATS to the whole family!