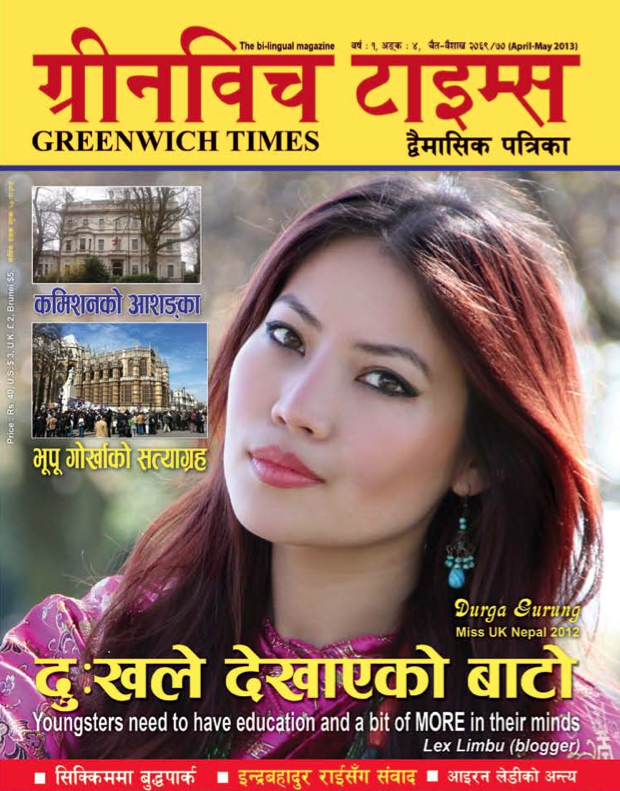 How beautiful does Miss UK Nepal 2012 Durga Gurung look on the cover of Greenwich Times?? The magazine which has been started by a group of Nepalis in the UK featured Malvika Subba previously. The bilingual magazine has a compilation of informative and educational articles focused on the Nepali population living in the UK. Since winning the crown last year, 21 year old Durga has been juggling her studies at Kingston University and her duties as a Miss UK Nepal. She also completed her year as the president of Kingston University Nepalese Society.

Since the past year Durga has also been involved in Project United alongside a group of Nepali youths from the UK. As part of the project, Durga will be flying to Nepal in early July to carry out the work along with the team. She will be spending a month in Nepal. Durga will be holding an afternoon at Nirmaya Rodhighar in Aldershot for the elderly Nepali population on Friday 21 June, she will deliver a presentation on health awareness and provide entertainment with various live music and cultural performance. I must say that the afternoon that she will be having for the elderly group of Nepalis in Aldershot is a wonderful initiative by Durga.

Lex Limbuhttps://lexlimbu.com
Lex Limbu is a non-resident Nepali blogger based in the UK. YouTube videos is where he started initially followed by blogging. Join him on Facebook and follow him on Twitter.
Previous articleHealth Charity Maya Outreach Celebrates First Anniversary
Next articleNepali Cinema Scriptwriting Competition 2013