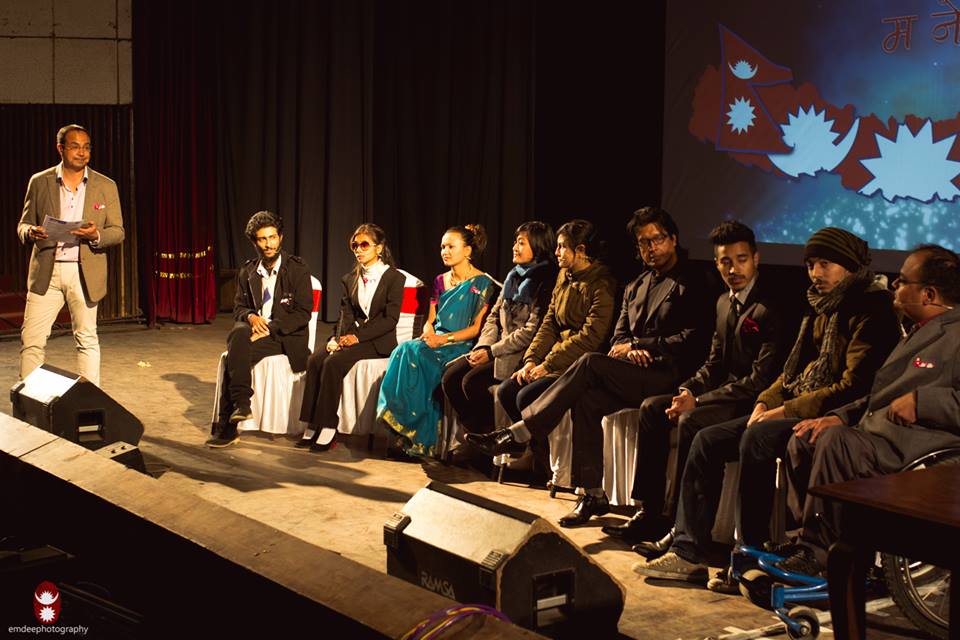 Titled MA NEPALI – HAMRO NEPAL, this was an event I was a little sceptical about. I bought my tickets at an affordable Nrs 150 each to attend the talk program at the Nepal Academy Hall on Wednesday afternoon. Sceptical? You may ask… “Ten speakers” to me is a lot.

Jumping straight onto the event and the speakers – everyone spoke well and brought a new point on stage with them. A few raised the bar, they were TED Talk material, to be specific – Shristi KC, Sagar Prasai and Shailee Basnet for me were outstanding. Shailee Basnet spoke not only about the Seven Summits Women Team and their achievements but related their journey as mountaineers with the path the country was heading towards, the education, empowerment and breaking down stereotypes along the way; that was insightful to hear and inspiring to know. They focused on MA, excelled at MA and through their individual action, they have made a national impact, even bigger, a global impact. From taking Nepal’s name to the different highest points of the continent to even the White House, Basnet and her team are unstoppable and unbreakable.

Likewise, Shristi KC who lost her eyesight due to a doctors “mistake” at the age of 16 – just when LIFE was about to happen showed vigour, spoke with confidence and injected energy to the 1500+ audience. KC not only spoke of turning her pain into her strength but also gave a subtle reminder to the media folks to project those that are blind or “less able” to also show them as strong individuals who continue to live life to the fullest. A gentle nudge to the Nepali film fraternity that often portray the less able as a “burden” to the society. KC not only rocks her world but she rocked the stage as she wrapped up her inspiring talk by performing in the popular song “Malai Pugena Yo Baisha Le”. She also left many of us in tears.

When Sagar Prasai took the stage, he also took our imagination with his calm voice and gentle appearance. Having known Prasai since 2011 and now becoming a huge admirer of his words and daily updates on Facebook, I was excited to see him on stage – for him to share his story, for him to talk about how he changed many cannot’s to CAN’s. I wanted the people in the audience to be driven by Sagar’s words and his experiences and judging by the reaction of the people that made up the attendance that day, I believe they have. An exceptional figure who has utilized Facebook as a powerful weapon, Prasai is somebody who you need to follow! When he spoke about a moment he had with a friend when he shared that he no longer wanted to live; that was hard-hitting. With a high suicide rate in Nepal, many may have had similar thoughts in the past or present – Prasai was very honest about his life and the thoughts he had along the way. For the many young folks in the audience, I am sure he has made a huge difference in how they will approach their day, their life and themselves from that moment onwards.

I would love to write about all the speakers but I don’t think I should – maybe you guys who missed out should attend the next one and hear from these figures for yourself. Abdus Miya and Saunak Bhatta energized the crowd, lifted their spirits and reminded us to be ourselves. Hearing Dr Bhimarjun Acharya about the constitution was highly informative. Kshitij Raj Lohani spoke not about himself but his recent observation, he raised few critical questions about accepting the fact that Nepal is not the greatest country in the world, it is through accepting and realising that – that we will start our journey towards becoming great. Superstar Rajesh Hamal highlighted how even he as a Nepali has faced certain setbacks beyond Nepal but he emphasized on the importance of turning our pain into strength to do better. The spoken word poets Ujjwala Maharjan, Yukta Bajracharya and Rochak Dahal creatively spoke about being a Nepali and highlighted the issue of citizenship in the name of mother. The team of three performed very well.

The audience were made up by mainly by students and I fully believe that they will all have something to take away with them from the talk. From people’s personal life journeys to reminders on how to evaluate life, success to leadership; the MA MOVEMENT focused on all areas. It was a wonderful event hosted and facilitated by Anil Keshary Shah under the Ma Movement. I was unsure about the ‘objective’ of the event but I fully believe that such events will help young students and young adults in viewing life more clearly.

Follow Lex on Twitter!
Read More:
I Have An IDEA!
Message From Anil Keshary Shah
Motivational Seminar With Saunak Bhatta – A SUCCESS!

Lex Limbuhttps://lexlimbu.com
Lex Limbu is a non-resident Nepali blogger based in the UK. YouTube videos is where he started initially followed by blogging. Join him on Facebook and follow him on Twitter.
Previous articleThe Power Of Football in Nepal – VIDEO
Next articleMira Rai and Samir Tamang Win MSIG Sai Kung 50K Run in Hong Kong