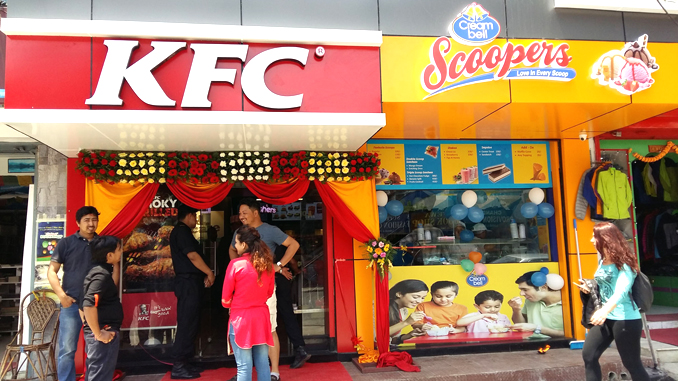 Kentucky Fried Chicken, better known as KFC has finally opened in the tourist spot of Lakeside in Pokhara! The third KFC restaurant in Nepal with an all women team opened its doors last week in the lake city. Unsurprisingly, the news of KFC and the first day saw quite a number of fast-food lovers as well as those curious to try out KFC. With a team of 40, the KFC in Lakeside, Pokhara can serve up to 155 customers at a time. Perfect location for KFC! I’m sure many international tourists will pay a visit to something that is familiar to them.

The very first KFC outlet in Nepal opened back in 2009 in Durbar Marg. Since then a second outlet of KFC has opened in Tripureshwor. The journey of the fast-food chain in Nepal has not gone without challenges with the chicken-joint facing a closure indefinitely in 2015 over labour issues.

[KFC and Pizza Hut Close Down in Nepal]

Let’s hope KFC and all the team remain happy in Pokhara!