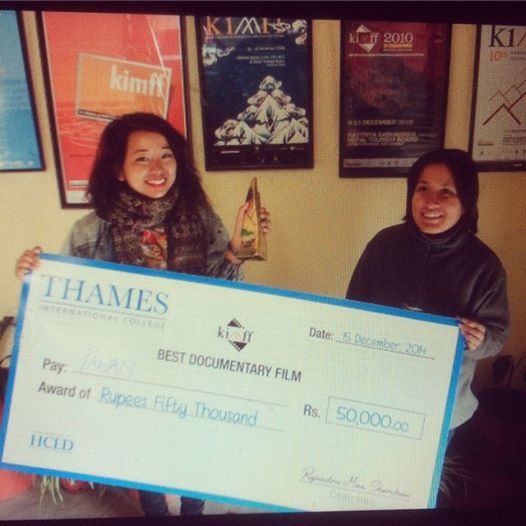 It has been a while since the Kathmandu International Mountain Film Festival 2014 took place in mid-December at Kumari Cinema in Kathmandu but one person who I really need to take time out and congratulate is my dear cousin and friend Laxcha Bantawa. Laxcha who recently graduated with Film Studies from University of Cumbria, UK had submitted her short-film PAWAN to the KIMFF jury and not only was it selected but it also won Best Documentary under the Nepal Panorama Non-Fiction category. Unfortunately, she wasn’t in Kathmandu to receive the award and her prize money. After she wrapped up her Everest Base Camp trek, Bantawa shared the big news over on Instagram and Facebook. She shared “I am so honoured to announce that my film ‘PAWAN’ won the ‘Best Documentary’ category in the Kathmandu International Mountain Film Festival. As I mentioned in the screening last week, I only graduated a few weeks ago, so having the first show of my film in the biggest film festival in Nepal is already so overwhelming, But to actually win the Nepal Panorama Non fiction category!!!- is just beyond what I had expected Thankyou @kimff for the opportunity to share this story, so grateful, Absolute honour”.

Hopefully I’ll get around to watching PAWAN soon. Pawan captures the story of a young Nepali boy by the name of Pawan who moves from a small town in Jhapa, Eastern Nepal to Leeds, a city in Northern part of the UK.

I have wonderful memories of us creating home-videos during the times she would come over to stay at ours; making parodies and uploading it on YouTube back in 2007. The videos were raw, very point and shoot style and in a scripted way, quite natural. Gorey Gurung Parody, Korean Film Parody, Apple Revolution, Darpanchaya Parody were just some of the videos that Laxcha created. Then it was fun and games, entertainment only. Her drive to go beyond led her to direct Manas Ghale’s solo single YATRI which drew in positive response and also landed her a nomination at the British Student Film Award in London. Likewise, her editing for Lex in Nepal didn’t go unnoticed. It’s amazing to see someone who went beyond the comfortable world of internet and in the direction of that they always desired. PAWAN is a start and I hope you strive for bigger challenges in the days ahead.

PS. Laxcha donated quite a chunk of her prize money to Maiti Nepal.

Lex Limbuhttps://lexlimbu.com
Lex Limbu is a non-resident Nepali blogger based in the UK. YouTube videos is where he started initially followed by blogging. Join him on Facebook and follow him on Twitter.
Previous articleTwins Come Out To Dad – VIDEO!
Next articleNEW: Rupakot Resort